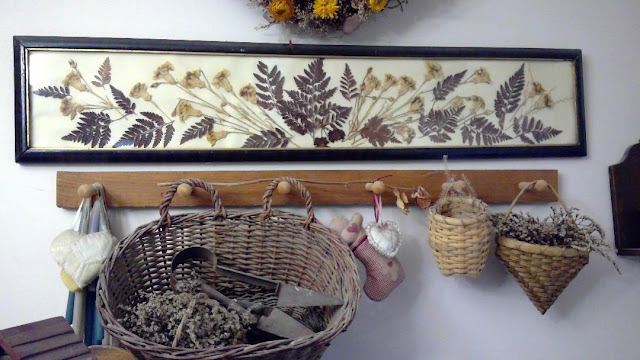 "I wish to urge again the importance of self-reliance on the part of every individual Church member and family. None of us knows when a catastrophe might strike. Sickness, injury, unemployment may affect any of us. We have a great welfare program with facilities for such things as grain storage in various areas. It is important that we do this. But the best place to have some food set aside is within our homes, together with a little money in savings. The best welfare program is our own welfare program. Five or six cans of wheat in the home are better than a bushel in the welfare granary." (President Gordon B. Hinckley) 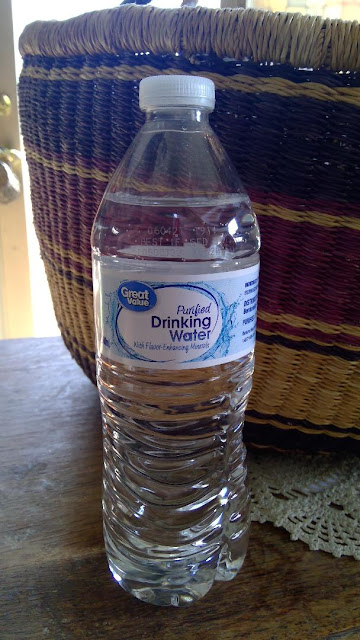 Well this will be over with by the time you get this Monday Message - Thursday late evening about 10, I flushed the toilet and...nothing. I thought, oh no! (as I was the one who fixed the toilet, you may recall) We looked but nothing was out of whack so my husband went downstairs to check. Yep, no water anywhere. He got in the car to see if he could discover what was wrong (we don't pay the water bill as it is direct payment or that would have been a question). Sure enough, four blocks away a water main broke.

Now I have water to flush toilets and such but just last month I thought we needed to use our drinking water as it was a year old already...I think you see where I’m going...

The water did come on during the night but our town was then placed on a boil order. It said if the water is clear you could boil and use it but if the water is colored you had to have an alternate water source. Well, because we are so special, yep, no clear water. It looks like the glass of water you always see in the news in Flint, Michigan.

So that meant getting water. A friend brought some water over which was nice. This is now Saturday but feels like forever ago, definitely going to keep rotating drinking water.

I know other places do not have a limit of one package of toilet paper at the store but we still do.  What blew my mind was that they also had a limit on packages of water - who knew?

Our town is under 1,600 people and I am sure they all are having to get drinking water. I am grateful we still had the ability to flush. That is a huge blessing.

So let's talk about the water needs...

We cannot drink it, can't brush our teeth in it, can't cook with it and there is NO way I would shower in it...pretty much flush with it is all that can be done.

Fortunately, I keep up with everything. The laundry was done and I had just run the dishwasher after supper...so I am glad that is my habit.

Oh dear, everything takes water - brushing teeth, cooking, dishwashing (I picked up extra paper plates at the store, etc). But washing dishes and rinsing would take a lot of water. The cats were looking at me strange as I poured bottled water in their water dish. I would not want to wash clothes in this water either.

They said the earliest would be Monday morning but I am sure it would depend on the water tests.

I am feeling like saying we need to store food and water for when - not if - the next thing happens,  because we just keep having things happen.

So work on your water storage as well as your food storage. Plus, keep in mind other items as well like your first aid supplies. I was in Salt Lake City long years ago and they had a room with food storage in it. It was very interesting, they covered wheat cans with contact paper and they became shelves by putting wood on them, then two more cans and more wood. It was pretty neat.  They had bolster pillows made for the couch but instead of stuffing in them they had extra blankets for the stuffing, it was very neat. They made those baskets you see with coils of fabric but here again they had socks stuffed in the coils for part of the clothing storage. They had plastic barrels that they put a wooden top on and covered with tablecloths, one had sugar, the other water and they were end tables for the couch.  Remember the coil basket? It was filled with light bulbs. There were games and puzzles and fabric on those shelves along with books. There was a treadle sewing machine set up and kerosene lamps on that. But the neatest thing was a wooden box that sat in front of the couch. The top was like a frame with plexiglass in it that, looking through that top, the box was filled with their first aid items.

So things definitely to think about, right?

This week I have been working on the loom. 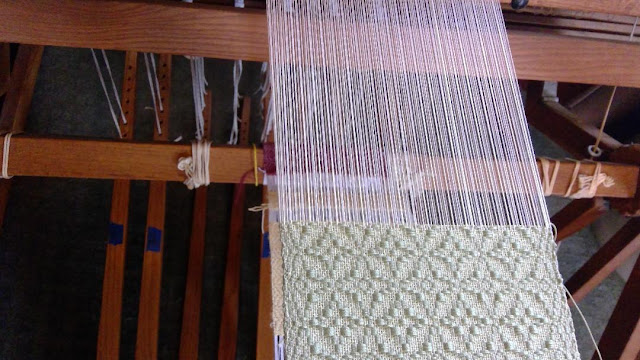 This is moving along nicely. I am now working on another like this. I want to say I think it looks way better than I thought. I am using big balls of crochet cotton as I have lots from yard sales. In fact, I tossed several downstairs to play with as my hands were full with other items. It was like a mad crocheter was loose, too funny.  But it does look great and I am going to play with the ones I tossed down. By the way they are in a basket now.  So much cheaper than buying fiber for the loom I say.

I did have some trouble when I crawled under the loom. My bifocals misalign what I am doing and I could not figure out what the problem was. So I went over and over till I finally took off my glasses and saw the wrong shaft was tied up. Now I will know not to have my glasses on under the loom when I am switching tie ups. 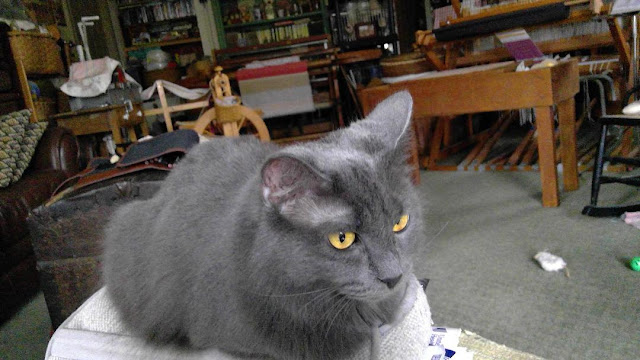 Missy said if she had thumbs she would have helped me. 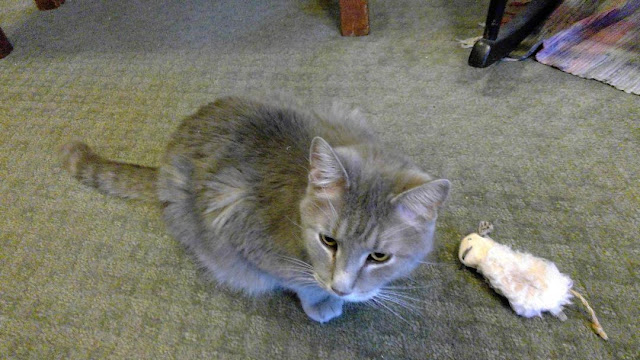 Gus said if it were a toy he would be all in. 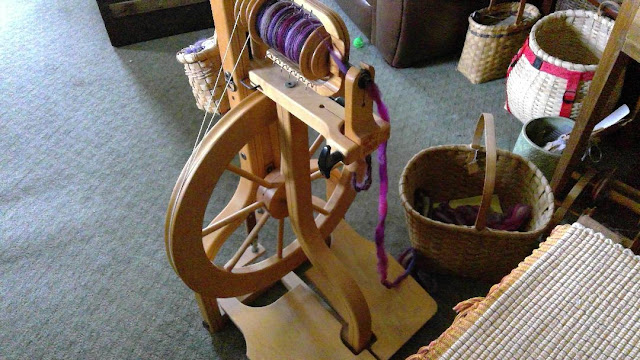 I also had some time to spin this week as well.

How are you coming with learning skills? Are you working on your storage? 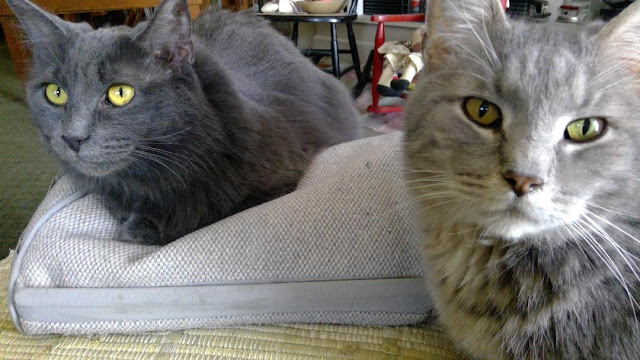 Gus and Missy say to be safe and they love you all.